Ordinarily, many of us look towards advancing technology as the future of accessibility.  Simon Mulholland, however, has gone against the grain.  He’s developed a distinctly low-tech solution by manufacturing an all-terrain wheelchair accessible carriage designed to be pulled by his four-legged partner, a pony named Obama.  Now, Simon has set up his own company to help wheelchair users access parts of the countryside that would normally be off-limits to them.

The unusual business idea came about after Simon read an article which stated that wheelchair users would have to accept there were parts of the countryside that would always be inaccessible to them.  He strongly disagreed and challenged himself to create a vehicle which would be secure and safe for a wheelchair user, as well as being able to be used on tough terrain.  As Obama was already part of the family, Simon thought his strength would be ideal to power his vehicle.  Not only that, but using Obama meant his carriage was less complicated to build and maintain as well as eco-friendly, not to mention cheaper to fuel!

Next, Simon set about building the innovative three-wheeled carriage.  The unique wheelchair-friendly design is comprised of a platform where the user can sit securely in the comfort of their wheelchair.  Attached to the platform is a lightweight, foldable ramp for access.  It uses a trio of large, chunky wheels that can tackle a range of tricky terrain including sandy and stony beaches and rocky hiking trails.  The carriage is attached to Obama, who dutifully pulls it along while being guided by Simon himself. 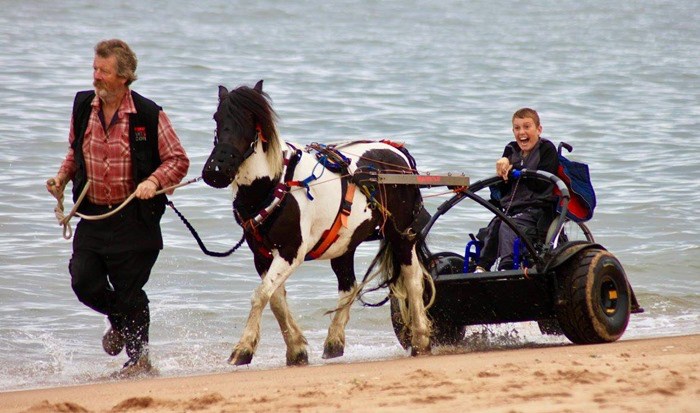 Since Simon’s original design was developed over seven years ago, he has continued to improve the carriage, updating it here and there and adding more features.  As word spreads about the business and bookings start to increase, he’s found himself and Obama busier than ever.  Because of this, he has expanded his ‘fleet’ to include a new helper, a pony called Toby.  He’s also started working with a range of nationwide disability charities who help organise the excursions.  Though the horses can go almost anywhere, the most popular outings have been beach rides as the carriage makes light work of the sand.  So far, Simon has taken countless customers to over 40 beaches in the UK, like Kathleen who’s lived with MS since 2007.  She’s been a full-time wheelchair user after the condition caused her to become paralysed from the neck down.  Last year, she enjoyed an exhilarating outing with Simon and Obama along the beach at Aberdeensire’s St Cyrus Nature Reserve.  She told BBC’s Landward;

"I never thought that I would go to a beach again, but it just shows you that life in a wheelchair doesn't have to be miserable"