After Jo O’Callaghan developed a condition that caused her severe pain down her right side, it left her unable to wear a shoe on her right foot and it was eventually amputated.  The mother of one from Kent soon found her wardrobe filling up with unworn right shoes.  Now though, she has put her collection of odd shoes to good use by setting up an online swap shop for amputees like herself.  The Facebook group she started, ‘Jo’s Odd Shoes’ now has almost 1,000 members across the country and has become a valuable support network for its users.

It was 18 years ago when Jo woke one morning to an intense pain down the right-hand side of her body.  The pain was soon localised in her right leg and foot where it became swollen and discoloured.  After endless trips to her GP over a 10 year period, she was eventually diagnosed with Complex Regional Pain Syndrome (CRPS) an extremely rare condition.  The condition meant that anything simply brushing against her foot left her in extreme pain and the only option for Jo was amputation.  While waiting for her operation, Jo tried to take her mind off her condition by ensuring her unwanted shoes went to people who needed them.  Jo explains how the idea for the Facebook page came about, explaining to the Metro Online;

“I got to the stage where I hadn’t been able to wear a shoe on my right foot for about six months.  Being a shoeaholic I was beginning to get a pile of size 6 lefts in the bottom of my wardrobe.  I knew I wasn’t the only person wearing one shoe as I had spoken to others on a CRPS Forum.  So I thought I would trial ‘Jo’s Odd Shoes’” (Metro, 2019)

A Shoe on the Other Foot 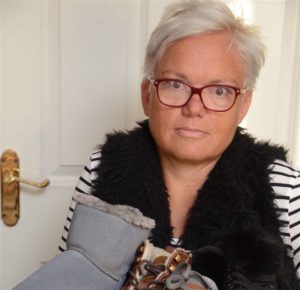 When Jo started the group, she was overwhelmed with the positive response she received, and the number of donors and members steadily grew.  Jo has now recruited two members of staff to help her with the large number of donations coming in.  Each shoe that comes in is photographed and posted online onto the group.  For those looking for a shoe, Jo is insistent that the shoes are not to be paid for and only asks for postage and packing.

Jo’s Odd Shoes now have around 1000 shoes in stock at one time.  Most members of the online group are amputees, but not all.  Some have feet of two different sizes and are able to find exactly what they need from Jo’s Facebook group.

Jo still lives with the painful condition and is in constant pain but says that the group is so busy that it has helped shift her focus and distract herself from the condition as well as a source of support.  Jo concluded; “The group gives me something to focus my pain on, but it’s still there 24/7” (Metro, 2019).